"> The Phases of Transits | Eclipse Portal
Skip to content 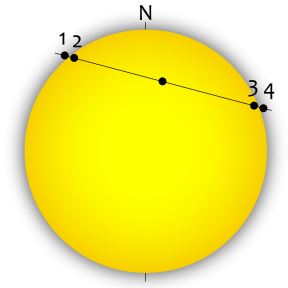 First contact is the point at which the planet’s disc makes first ‘contact’ with the edge of Sun as viewed in the sky. The tiny planet appears to make a small indent on the solar disc.

Second contact is the point at which the entire planet has reached inside the disc of the Sun.

Greatest transit occurs almost 3 hours after second contact. It is the mid-point of the transiting planet’s track across the solar disc.

Fourth contact is the point where the planet’s outer edge has left the Sun’s disc marking the end of the transit.